I’ve been taking my son Tom to his basketball practices.  My wife Staci used to do it, but she got bored just sitting there for an hour.

This requires the average parent to sit on the half-open bleachers and fill an hour.

Some talk to each other.  Some read.  One knits.

I fill the hour in a different way.

Tom gets a rebound.

It is as though I am rooting for another team.  An invisible one.  And Tom is the enemy.

If nothing else, it is a novel approach to parenting.

So far, the other kids’ parents haven’t said anything.  Mostly because they think I’m an unstable vagrant who’s wandered into the gym.

And Tom handles it well.  When the practice is over, he lets me walk about twenty yards ahead of him all the way to the car.  As though I’m not his father.  As though he too believes I’m an unstable vagrant who’s wandered into the gym.

But I don’t mind.  I just get in the car and wait for him to open the door and sit in the passenger seat.

And as he does, I don’t start the car.  I don’t do anything.  Because I know it will make him turn his head toward me.

And when he does:

I boo the way he sat down.

For those of you who’ve always had a burning desire to ask me that Pearls question you’ve never asked, I’m appearing live on KSRO radio tomorrow (Nov. 23) at 5 p.m. PST (so that’s 8 pm for you East Coasters).

And I’m thinking I need to put together some sort of contest, but I don’t know what it is yet.   Maybe I’ll play Trivial Pursuit against one of you, and if you beat me, you get a signed sketch.  But I’m not sure what I want to do yet.  So if you have any good contest ideas, fire away.

And call in tomorrow to talk.  You’ll find me very very charming.

Luck is a relative thing.

Take, for example, a summer vacation.  You arrive at the hotel and the front desk clerk tells you,  “You’re lucky.  We ran out of regular rooms and had to upgrade you to a suite.”

Or you go outside to the hotel pool and the pool attendant tells you, “You’re lucky.  We’ve had rain all week, and today is the first sunny day.”

But luck is different in Afghanistan.

“You’re lucky,” said our military escort as we got off the plane, “The base hasn’t been attacked in weeks.”

See, that makes me feel about as lucky as I would checking into a motel and being told, “You’re lucky.  Guests here are kidnapped from their rooms a lot less than they used to be.”

As if that wasn’t enough, our military escort then delivered a more devastating bit of news.

As though having a bomb dropped on my head wasn’t enough.  Now I’d have to stare at the creator of Family Circus standing around in his “Kiss Me, Dolly” underwear.

And don’t take my word for it.  Just look at him in this pre-removal-of-pants shot and imagine for yourselves.

All that separated me from him was that little desk on the right.  See, here was my bed on the other side of that desk.

That’s a mere four feet between me and The Jeffy.  Almost close enough that he could reach out and hold my hand during the night.  I finally understood the meaning of the phrase, “War is Hell.”

But I am a trooper.  So I took one for the team and roomed with The Jeffy.

Our first step was to unpack.  I took out all of my cool clothes and put them in drawers.  He laid out his “I Love Billy” underwear for Tuesday, his “I Love PJ” pajamas for Wednesday, and the “I Love Dead Grandpa” thong for Thursday.

When we finished unpacking, we sat on our respective beds wondering what we could do for the next couple hours.  He was thinking about getting something to eat.  I was thinking about how I could change the locks while he was gone.

We compromised and each sat at the desk signing a bunch of the postcards with our characters on them that the USO had given us to hand out to the troops.

And that’s when the air raid sirens went off.

And at that moment, my greatest fear was not my possible demise.  It was that my last vision on this planet, the one that would have to carry me toward the afterlife, would not be of a nude supermodel begging me to make these last few moments count.

It would be this: 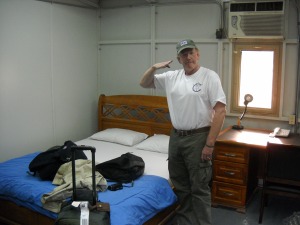 So much for being lucky.

UPDATE:  Jeff Keane responds in the comments section below.  But keep in mind, his version of events is one-sided, biased, slanderous, exaggerated and wholly false.  Unlike mine, which is the God’s honest truth.

I’m on a flight sitting next to Doonesbury creator Garry Trudeau and I have a lot of questions.

For me, this is out of character, for I make it a point to never talk to the person sitting next to me on a flight.  Especially a long flight.  And this one qualifies.

We are flying from Washington, D.C. to Frankfurt, Germany and then on to Afghanistan.  We are on a USO trip to visit the troops in Kandahar.

But this is Garry Trudeau.  And I have questions.

Making my mouth move even more freely are the Sierra Nevada beers I pounded at the United Airlines lounge just before getting on the flight.  (My goal was to get so drunk that my buzz would carry me through the next seven days of alcohol-free Afghanistan.)

Before I know it, three hours have passed and I’m still asking questions.

That’s when Garry puts his index finger to his lips and says, “Shhh.  We should probably keep our voices down.  The guy on the other side of me is trying to sleep.”

But that doesn’t stop me.  So I keep firing away.  Only quieter.

And then it happened.  I don’t know exactly when it happened.  Or how.  All I know is that I had asked him this question about regrets and then looked over at this legend of syndicated cartooning and saw it with my own two bloodshot eyes.

The guy he had chosen to sit next to.

At least now I knew one of his regrets.

I have a pretty crappy travel agent who I stick with only out of loyalty.

Anyhow, she recently recommended I visit a place that was a bit off the beaten path and not filled with tourists.

So my next report will be from there.

Wish me luck.  Because as vacations go, I never have any.

So I have a turkey sandwich in one hand and vitamin water in the other and I’m getting into my Honda Accord when a poodle-y looking dog pokes his head out of the half-open window of the car next to me and barks.

It shocks me so badly that I fall sideways into my driver’s seat, causing my shoulder to hit the horn in the steering wheel.

Which causes the dog to stop barking.

I quickly close my car door and stare bravely at the dog.  He stares back.

I am having a staring contest with a dog.

Then he barks again.

So I honk the horn again.

And he barks again.

So I honk again.

And so it went.  For two minutes.

I’m not saying this is the proper way to handle “the-dog-who-pokes-his-head-out-of-the-car-parked-right-next-to-you-and-barks” situation, but it did mark the first time I’ve written an avant-garde symphony with a dog.

I am nothing if not innovative.