The parking lot I park in here in Santa Rosa no longer has a person that takes your money at the gate.  They have one of those little parking machines you have to find and put your money in.

The fee this morning was three bucks, so I put in a five-dollar bill and got two dollars back in change.

At least that’s what I thought.

When I took a closer look, I saw that I had received two coins, each with a guy named Franklin Pierce on them.

In short, I was the victim of a practical joke.

I say that with confidence because if you look up Franklin Pierce on Wikipedia, you’ll see that he was a former U.S. president whose main accomplishment appears to be this:

“When the issue (of slavery) flamed up early in his administration, Pierce did little to cool the passions it aroused, and sectional conflicts reignited.”

That last phrase is a fancy way of saying he triggered the Civil War.

Wikipedia ends the article with this nice little summary:

“Pierce has been ranked among the least effective Presidents.”

Okay, so my guess is that someone here in Santa Rosa is minting coins in his basement.  Which is fine.  My only comment to him is that he could have picked someone funnier.  Liberace and Scottie Pippen come to mind.

Now the even worse scenario here is that the coin is somehow REAL and that the U.S. Mint has finally gotten so low on the List of People Whose Heads Should Be On Coins that we’re down to idiots who have caused sectional strife.

I doubt it, but if that’s somehow the case, surely my coin cannot be far behind.  I mean, consider this:

2) I’ve ignited sectional conflict (I once angered the entire nation of Turkey with a comic strip); and

3) My hair is more stylish than that of Franklin Pierce.  Which is not to say mine is stylish.  But please, look at this goofy mess.  And don’t say it’s a 19th century thing.  Because Lincoln was from that era, and except for that mole, he looked great. 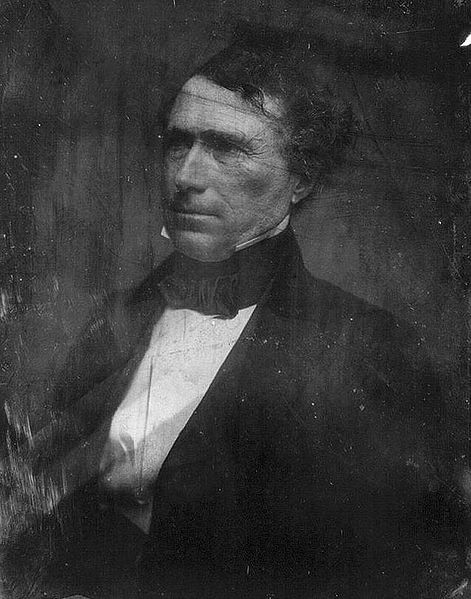 So if you have some pull at the U.S. Mint, please, make things happen.  And I don’t want to be pushy, but I’d like it done quickly enough so that the next time I park at that lot in Santa Rosa (probably next Wednesday), my change will have me on it.  And to make this as easy as possible, I’ve even located a photograph of me that I think would be nice on a coin.

It’s me eating a crawdad I found in a nearby swamp.

I’ve carefully chosen this pose because it’s symbolic of how it’s a “dog-eat-dog” world and you have to fight for every dollar you earn.  And don’t make fun of that, because it makes way more sense than that silly pyramid with the eye over it on the dollar bill.

So please, even if you don’t have any pull at the Mint, you surely have a few seconds to contact the Treasury Department and make sure this happens before Scottie Pippen fans get wind of this and beat me to it.  And for bonus points, send me the Treasury Department’s response, which I’ll post here.  The worst they can say is no.  Which is doubtful, since they’re down to Mr. Funny Hair.

And please, no requesting your own face on the coin.  While you too may be an idiot, I thought of it first.

54 thoughts on “In Stephan We Trust: A Mission for Pearls Before Swine Fans Everywhere”