Tonight, I get to be on my first ever live webcast at 7 pm PST. The webcast is for the launch of a book called “Whatever Happened to the World of Tomorrow” by Brian Fies. Brian won the coveted Eisner Award in 2005 for his book “Mom’s Cancer.” Come, watch me make an ass of myself. 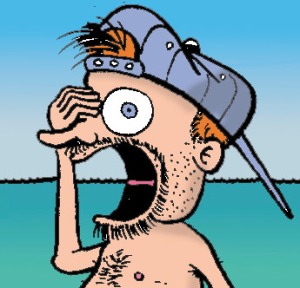 The man behind me in the security line was whistling.

It was an act against God, nature and eternal goodness.

Angered and disoriented by this stranger’s perky arrogance, I entered the men’s room.  And there, I witnessed a second act against God and nature:

A woman standing in my men’s room.

Short-haired and stocky, she was just androgynous enough for me to question if I’d pegged her sex wrong.  Trying not to stare, I made the turn from the sink area to the stalls.

And saw a second woman.

And realized I was standing in the women’s room.

I blame the perky guy.

Flew back from Hollywood yesterday and wanted to let you know that if any of you are having trouble speaking today, I know why.

The woman sitting across from me on the plane used up all the words.

She sat with her friend during the flight.  Their husbands sat in a different row.  That should have been a red flag.

And she talked fast, thereby increasing her word consumption rate.

Even more tragic was the fact that none of the words were put to good end.   She was the neighbor who lets her sprinklers run in the rain.

At the end of the flight, as we waited to get off the plane, she complained to her husband that he should not have chosen the seats they were in, because it put them at the back of the plane, and it therefore took too long for them to de-board.  Her husband said he always chose the back because there were less crying babies to annoy them during the flight.  But then he added, “But we had you talking the entire time, so you made up for that.”

I was giddy with joy.

The woman was not.

I nodded my head in agreement.

She stared at me,  stunned by my rudeness.

I was a little stunned as well.  Not by my reflexive gesture, but by the fact that her mouth had stopped moving.

Before you judge me, consider this:  I almost high-fived the man.

I’d say more about the fact that I took the moral high road, but I cannot.

Big-mouth took all the words.

Gave an interview on Monday that was supposed to last twenty minutes.  But somewhere in the midst of it, I somehow fell in love with the sound of my own voice and wouldn’t shut up.  So I talked about which cartoonists I could beat up; ripped into Star Trek; threw in a Magellan reference; invited 500 strangers onto a boat I don’t own; swore like a drunken sailor; talked about how my wife is a jinx; and threw in references to sex, smoking and Kill Bill.

Just click the following words:  “Stephan Making An Ass of Himself.”

I have to fly to L.A. on Thursday.  And this brings up an issue.

I never once have been asked out by a woman working the security line at an airport.  They always just stare blankly at me.  Sometimes there is a twinge of sadness in their eye.

And now I know why.

Last week, I found myself walking toward the front door of my local Starbucks at the same time as an eighty-something-year-old woman.  We were approaching the door from different angles, but given that we were the only two persons headed toward the door, it probably appeared to a neutral observer that I was racing her.

You see, my big cartoonist brain told me at that moment that old people  take exponentially longer to take money from their purse.  Plus, they like to talk to the person behind the counter.  Old people treat society as a place where humans should smile and interact.  That’s a risk my brain and I were not prepared to take.

So I walked faster.

I’m not trying to brag when I say I beat her handily to the door.  Which by Starbuckian law entitled me to not only go before her but even let the door shut gently behind me.   (Once inside, I probably can’t pull on the door to prevent her from getting it open, but everything short of that is within bounds.)

And then I pulled a funny.

I held the door and let her go first.

I don’t want to analyze this one moment of kindness I’ve shown thus far in 2009, but suffice it to say, I think I just felt bad engaging in a foot-race with an eighty-year-old woman for the front door of Starbucks.

I bring all this up only to tell you that today, as I was pulling my car into the Starbucks lot, the same old woman was in her car pulling into the driveway at the same time.   So I did the only thing I could do.

I parked that car so fast that the tires squealed.  I was out of my car and at the front door of the Starbucks before that old woman could even pull her keys from the ignition.  No foot-race here.  No ethical dilemmas here.

I had done the right thing.

Today I need to write a whole bunch of croc strips.

I know what you’re thinking:  Not a difficult task for me.

While this is true, I think the croc strips are the hardest for me to write.  Rat and Pig come much more naturally to me.   Rat’s voice is effectively my voice.  If I could, I’d write for Rat every day.

But it’s not the same with the crocs.  Their jokes tend to be more visual and physical, so the art matters more.  Plus, I can’t just give them any thought I want to, like I can Rat.  In the crocs’ case, they’re limited to one basic thought:  Eat.  Or, “eet.”  They’re almost like a strip within a strip.

For all these reasons, when I do the croc strips, I try to do a whole bunch at once.

I’m often asked where the crocs’ accent comes from.  Everybody that writes to me has a guess, and most are sure they’re right.  I’ve heard hundreds of guesses, the most common being Cajun. But I’ve also heard Russian, Mexican, Asian, Greek, Hungarian, Romanian, Middle Eastern, etc.

The truth is that I was inspired by the Saturday Night Live skit where Frankenstein, Tarzan and Tonto all try to talk with their characteristic broken syntax.

The lower case writing was inspired by how Bill Watterson wrote the dialogue for the Calvin and Hobbes’ bully, Moe.

So here I go, off to write for the reptilian terrors.  Please wish me luck.

Challenging the Pearls Roadster for pure dedication, this Pearls fan in Erbil, Iraq has placed Rat and Pig on a sign overlooking a children’s soccer field.    And if my Arabic is correct, I believe those words below “Ainkawa Football Academy” translate roughly to, “Thank you, Stephan Pastis, for lending us your characters, which have helped bring peace and joy to our country.  Your keen sense of humor is invaluable to the formation of a stable Iraq.”

I’ve noticed that all my problems have one thing in common:  They are caused by other people.

Armed with that knowledge, I have conducted my life with one central tenet in mind:

Avoid people.  Especially the ones you know.

Key to this strategy is the drive-thru line at my local Starbucks.  Instead of encountering a minimum of twenty other humans, you encounter just one, the person who works the window.  Encountering just one person instead of twenty eliminates 19 possible problems.  That has win all over it.  I’m hoping that one day technology will be able to eliminate that one person, but until that day, a man can only dream.

But this morning I had a revelation.  Why do we limit drive-thru lines to food and drink?  Why not expand it to all social interaction?

The social interaction I have in mind is the wedding.

Weddings have all three things any right-thinking person dreads in this life:  1) relatives; 2) speeches and 3) relatives.  Topping this off is the fact that you have to buy these people something from the most expensive line of china these idiots could find and you’ve got the making of a tragedy.

You would pull your car up to a window, where the bride and groom would be waiting.  You greet them. You say congratulations.  You hand them the gift.  You drive off.

Even better, do it at a Taco Bell during operating hours.  Then you kill two birds with one stone.  You give the wedding gift.  They hand you a taco and chalupa.

I am off to suggest this to some of wife’s relatives who are getting married this summer.  I hope they recognize brilliance when they hear it.

Well, they’re not in commercial production. Yet.

But this Pearls fan in Colorado made one for himself.

Here’s the view from the back, where I see he’s even got Danny Donkey and Snuffles on there.

And for bonus points, he’s even got the four Pearls plush ready to be blown away by some huge stereo woofers.

If you can top this man for sheer Pearls-devotion, send along the photos and I’ll post them here.  Provided they’re clean.  And you don’t tattoo anything on your baby’s forehead.

Pearls Before Swine
Create a free website or blog at WordPress.com.